Nakusp Municipal Well 1 and 2 (Past Project) 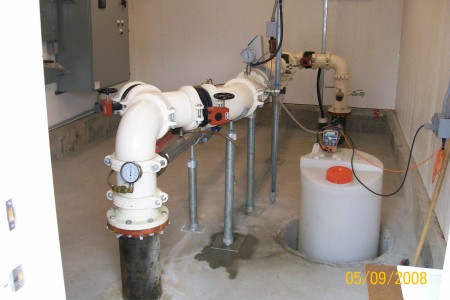 In 2005 the Village of Nakusp hired Delterra Engineering Ltd to complete a 200 mm drilled well that was drilled as a test well, and proved to be excellent water at 400 IGPM.  The well building was partially complete, and the system was connected to the municipal piping by previous work.   This is shown in the attached pictures.

To complete the system, a Village wide wireless SCADA control and observation system was specified and installed.  This allowed wireless feedback from the reservoir to the well for level control.   In addition, the Village was now able to monitor water and sewer infrastructure from the office computer and later, from web access.  The pump building was designed and constructed for a second Well#2, and pre-piped for this later addition.  Project items completed included:

Delterra Engineering Ltd was successful in obtaining a $400,000 Towns For Tomorrow grant from the BC Government to help with upgrades, generator power, and drilling of Well #2 shown in photo gallery pictures. In 2009,  Thorman Drilling from Nelson completed the drilling down to 280m, and the well was developed for 1000 IGPM.  Aquatech from Kelowna did the testing, and Sustainable Subsurface Solutions (Remi Allard) did the geotech.

Back to Past Projects