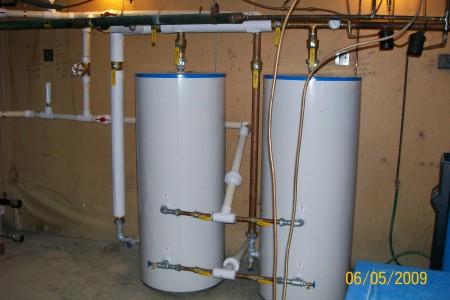 The Nakusp Hot Springs is owned by the municipality, and is one of the only publicly owned hot springs pools in Canada.   Originally, in the 1970’s the building was heated by the hot springs water.   The natural 125 F water was circulated into the floors using the copper pipe buried in the concrete floors.    This system was disconnected approximately in the early 1980’s as there was algae and sediment in the electric control valves.   A diesel boiler was later used to heat the water for the floors and showers, to avoid sediments.   There was a very small heat recovery exchanger and an ineffective heat pump that burned $2500/y  in electricity and did not raise the temp of the 125 F incoming feed water.

The solution:  Delterra lobbied staff and Council to purchase a heat exchanger to preheat and save at least 50% of fuel costs, using the natural 125 F water that was discharged at 70 GPM continuously from the facility.  For $15,000 in engineering and construction costs, a system was built in a very simple way.   Pump the waste pool water through an irrigation filter (removing sediments) and then floors, and two domestic water heating tanks with internal coils.  The whole system was manual, with bypasses, and flow control by hand valves.   Boilers and tanks are shown in drawings.   Less heat is applied to the floors in the summer, and maximum heat in the winter.  The system resulted in virtually 100% elimination of diesel fuel, with no purchases made in about 5 years.  The system was built with local tradesmen and the Public Works department.   The system also provides with high volumes of pre-heated water, so the building has reserves for high pool loads.   The whole building heating system can run on either a 1/2HP or 1 HP pump.

Other work completed at the Hot Springs by Delterra staff:

Back to Past Projects